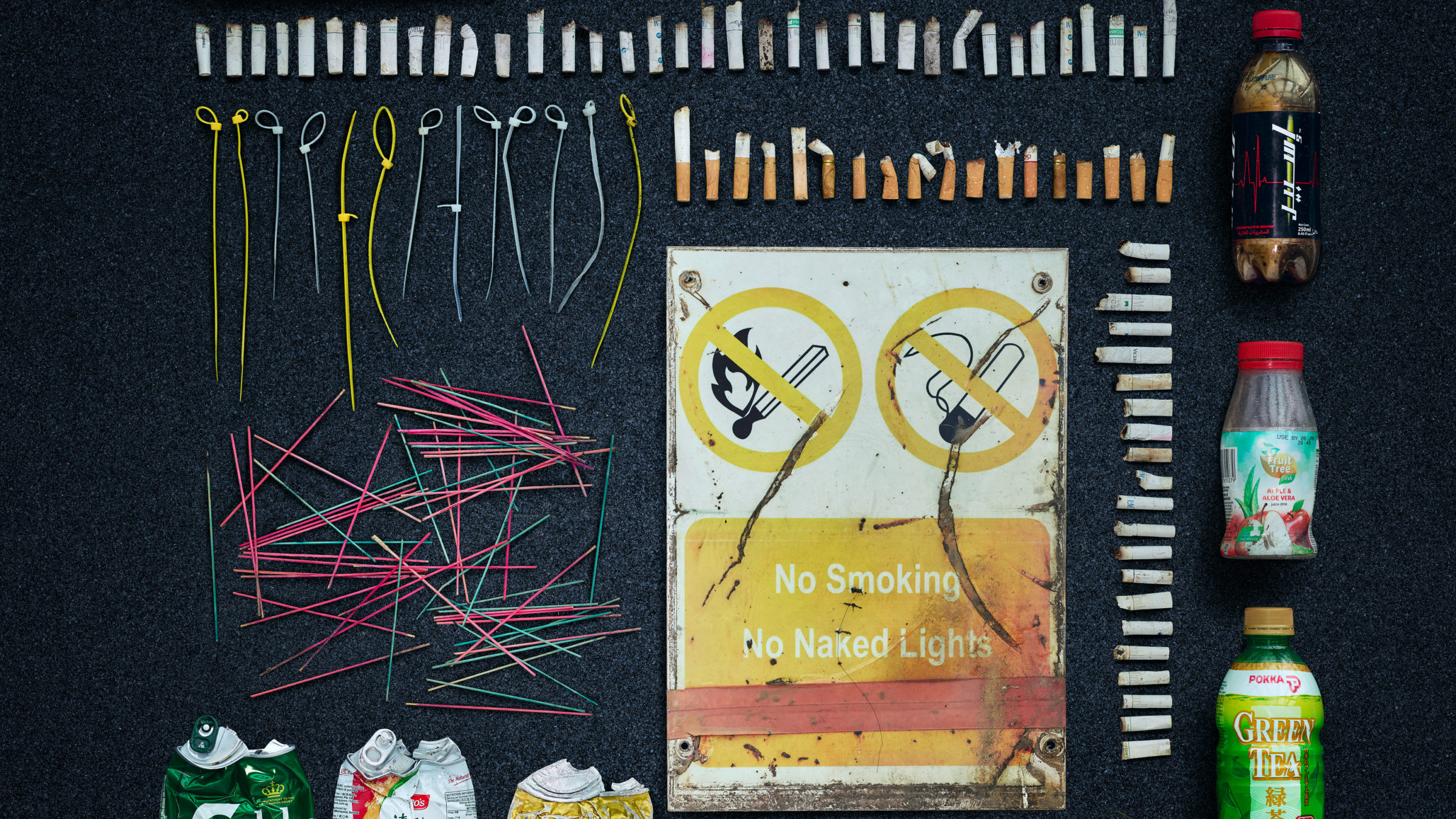 Meet our new Phase One Global Ambassador Simon Puschmann, who is an award-wining commercial photographer and director, who defies all categories. He has recently won Gold three times in the prestigious AOP awards for professional photographers for his personal projects: Naked in the Kitchen (2019), Wastelands (2020), and Forest Bathing With Timothy Leary (2020). While there are a lot of photography competitions out there for professionals, the AOP Photographers Awards are regarded as the original and the best – a celebration of exceptional work by the industry’s elite. For 30 years, he has been creating his own brand of dramatic, unexpected imagery for a prestigious clientele. He is also an environmentalist, who decided to no longer ignore the ecocide that is happing all around us.

Simon Puschmann is equipped with garbage tongs and gloves – in search of trash.

For his series “Wastelands” he collected what we don’t want to see: the legacies of consumer society – enormous amounts of rubbish everywhere. With “Wastelands”, he wants to highlight the scope and permanence of trash produced by humans in various metropolitan cities. By transforming garbage into an elegant exercise of composition, form and line, the disposed waste begins to create an unusual portrait of each respective place. Through each urban center’s trash, a picture begins to take shape that reflects unique consumption patterns and habits.

As Simon outlines: “By elevating these disposed materials, they become mediations on the larger global issue of excessive waste. This series is intended to be a visual critique of the crisis our planet is facing. As more and more trash is constantly accumulating in our environment, I was compelled to make a statement through my lens. My intent for this work is to resonate with viewers, raise awareness about the global trash issue, and inspire the audience to reduce their own personal consumption of trash and single-use plastics.”

Originally there were over 40 pieces planned for the series – the bigger the collection, the more meaningful the results, however the Covid-19 pandemic and travel limitations put a temporary halt onto Simon’s endeavors. He is feeling positive though that he will be back travelling soon.

Each collection is based on the same parameters to ensure a level playing field, allowing  Simon to feature the distinctiveness of the city. Simon focuses on a particular area, often influenced and advised by locals.

The time for collecting items is limited to 60 minutes and, as Simon outlines, during the first ten minutes the final image starts to take shape as he begins to understand what will be discovered in the location “Very often I see a certain piece of rubbish and know immediately that it will be the main focus for the project, my center piece.”

Once collected, all artefacts are then carefully placed on a 100×130 cm large piece of tarpaper in his daylight studio, following a particularly stringent method – very much influenced by conceptualist German photographer August Sander and the now pervasive “Flat Lay“ style of Product Photography made prevalent through platforms like Instagram. – it really is a mix of very old and very new school.

“I chose the technique known as “knolling” – a process of arranging objects at 90-degree angles and photographing them from above. By utilizing the same set up, the same lens, the same distance, the same surface and the same collection technique, a comparable series begins to form allowing us to objectively contrast and evaluate individual cities. Not only does this create a distinctive visual language and is symmetrically pleasing to the eye, using the subject matter of disposed trash creates a powerful and urgent juxtaposition.”

As expected, travelling the world and focusing on unique projects brings a range of stories with it. No continent, no city is the same and despite globalization, places remain unique – which is reflected in the findings of the Wastelands project. They pose a testament to each city’s everyday culture and tell the story of the lives of the people who live there. 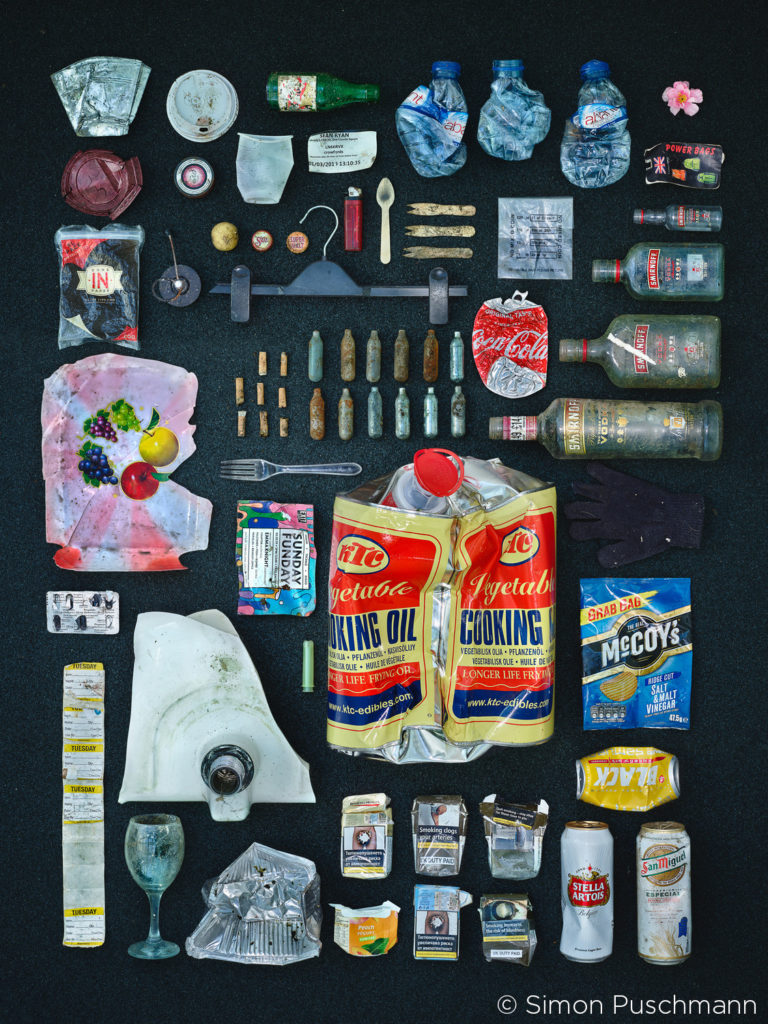 In London, while collecting his artefacts, Simon was wondering why he found huge numbers of cream whipper bulbs, which seem to be quite an unusual find until his son – studying in London at the time – explained that these were extensively used by the local youth to get high by inhaling the gas prior to go clubbing. 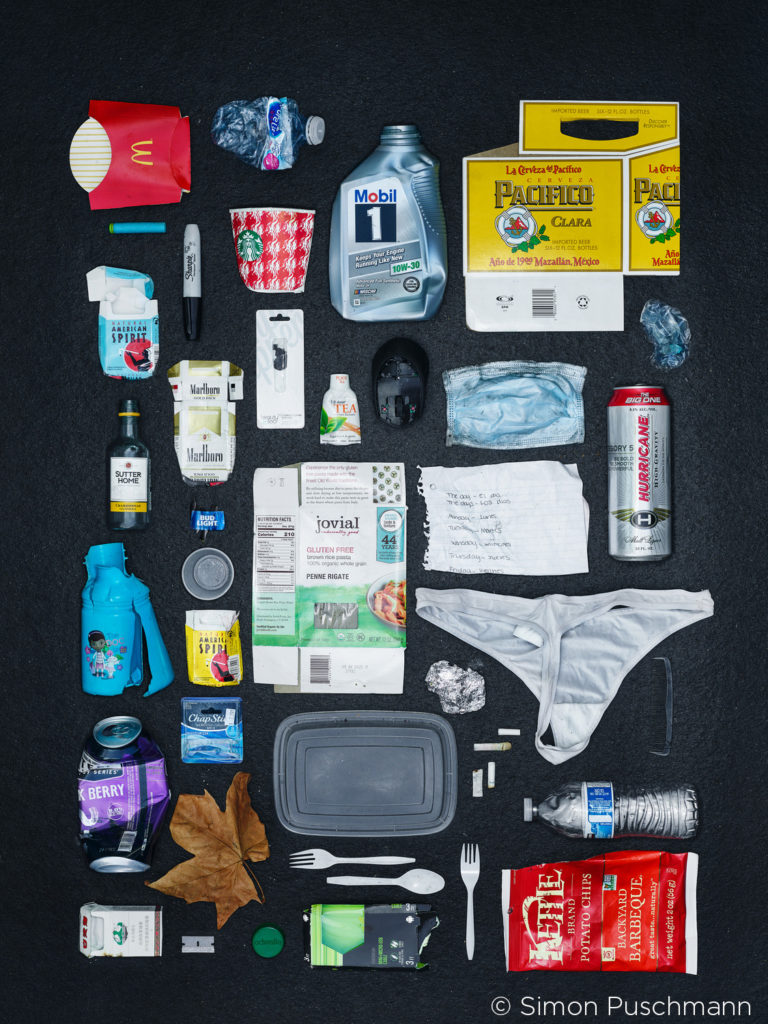 While he normally takes the rubbish home to photograph – much to the dismay of his wife – the concept of the project begain in the US where he hired a daylight studio and chose staging materials he thought would not only be a good surrogate for ashphalt (where most of the trash is found) but be easily available globall. That,however, proved more difficult than expected as he had extreme difficulty sourcing the the tarpaper he needed for the aesthetic in other countries like Singapore and Korea.

The collection of the trash, as simple as that may seem, doesn’t always come easy as Simon discovered… “a man once threatened to hit me over the head with a broken bottle for removing some garbage which he clearly felt ownership over. It was an interesting situation, which was resolved immediately with an apology on my part.“ 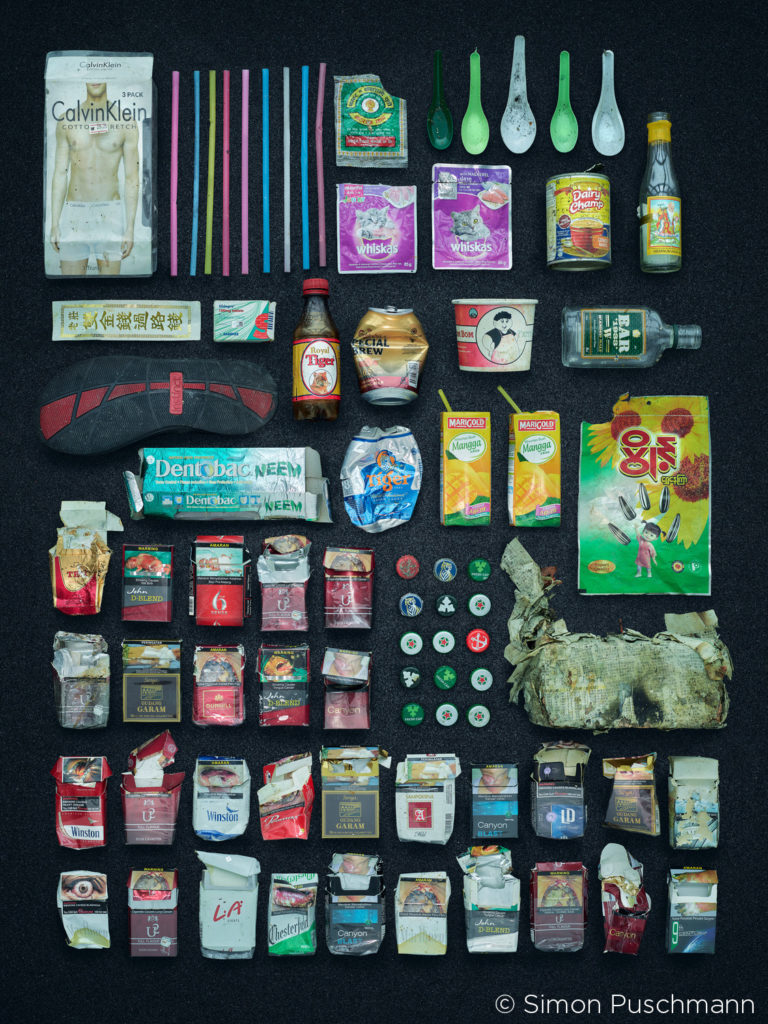 Not all collections go smoothly: While in Singapore, Simon took a day trip to Malaysia to collect the next artefacts, not realizing that he could get into serious trouble by bringing the artefacts back into Singapore. His taxi driver was extremely concerned and given the huge sentences in Singapore; he certainly had every right to be. Luckily upon returning to the Singaporean border, the taxi driver managed to tell the customs officer about that weird, eccentric tourist in his care and both, Simon and the rubbish returned safely to the hotel.

This intention of the work is clear, and the work has even been considered for use by the city of Hamburg, displaying the Wastelands images on their garbage trucks– raising awareness of the need to reduce our waste. Though it hasn’t happened yet, the ambition of spreading the message to a wider audience is a driving force for Simon.

The next generation is also already at hand to follow into his footsteps: A year 2 primary school group with their teacher is planning to recreate the Wasteland project and sell their art to buy a dedicated waste recycling system for their school.
Simon has a lot to share about this unique project and will do so during a talk at the Creative Content Conference @PHOTOPIA Hamburg in September 2021, titled “Aus nichts was machen”, loosely translated to “creating art from nothing”.

Plans for next projects

Simon: “I have a range of ideas for the future. A great variety of projects that have raised my interest recently. Amongst these are ideas like “the dark side of technology” or “shopping centre ceilings”, as well as looking into the cultural diversity of salt and pepper shakers in restaurants around the world.

We can’t wait to see his next project!

All Wasteland images are available as a 60×80 cm fine art prints (on Hahnemühle paper) in the shop on Simon’s homepage.